To promote a shared vision!

Find definitions, the reference concept for sex and gender mainstreaming, publications and many websites.

Definition of the Canadian Institutes of Health Research

Sex refers to a set of biological attributes in humans and animals. It is primarily associated with physical and physiological features including chromosomes, gene expression, hormone levels and function, and reproductive/sexual anatomy.

Sex is usually categorized as female or male but there is variation in the biological attributes that comprise sex and how those attributes are expressed.

Definition of the Canadian Institutes of Health Research

Gender refers to the socially constructed roles, behaviours, expressions and identities of girls, women, boys, men, and gender diverse people. It influences how people perceive themselves and each other, how they act and interact, and the distribution of power and resources in society.

Gender is usually conceptualized as a binary (girl/woman and boy/man) yet there is considerable diversity in how individuals and groups understand, experience, and express it.

SOGIESC is an acronym for sexual orientation (SO), gender identity and gender expression (GIE) and sex characteristics (SC). Unlike the more rigid and labeling LGBTI categorization, the « SOGIESC diversity » concept encompasses the complex realities of all individuals (see the schematic representation below). Some subgroups within the SOGIESC diversity are exposed to stigma and discrimination because they depart from restrictive sex and gender norms. This frequently results in specific health care and public health needs.

Sexual orientation is a multidimensional concept that refers to the gender(s) to which a person is romantically or sexually attracted. People may be stigmatized or discriminated against because of their sexual orientation and are frequently targeted because they diverge from the gender norm of heterosexuality, or the norm to be masculine for a man and feminine for a woman.

The deep inner feeling of being a man, a woman, in between, or neither. It can be congruent or not with the sex assigned at birth.

The adoption of behaviors, attributes, or roles that are socially defined as feminine, masculine, androgynous, or other (according to the prevailing norms in a given society at a given time). It is therefore fluid and does not necessarily correspond to what is expected based on the person's gender identity or sex assigned at birth.

Primary and secondary biological and physiological characteristics, including chromosomal, gonadal, hormonal and genital characteristics that cause a person to be considered medically female, male or with a variation of sex development.

After the sex characteristics have been established at birth (usually based on external genitalia), the child is legally assigned Female or Male at the civil status office within 72 hours. Since 01.01.2022, this assignment can be changed in Switzerland on simple request and without medical requirements to a registrar. Until the age of 16, the parents' consent is mandatory. To date, Switzerland does not have a third option (X for other or undetermined). 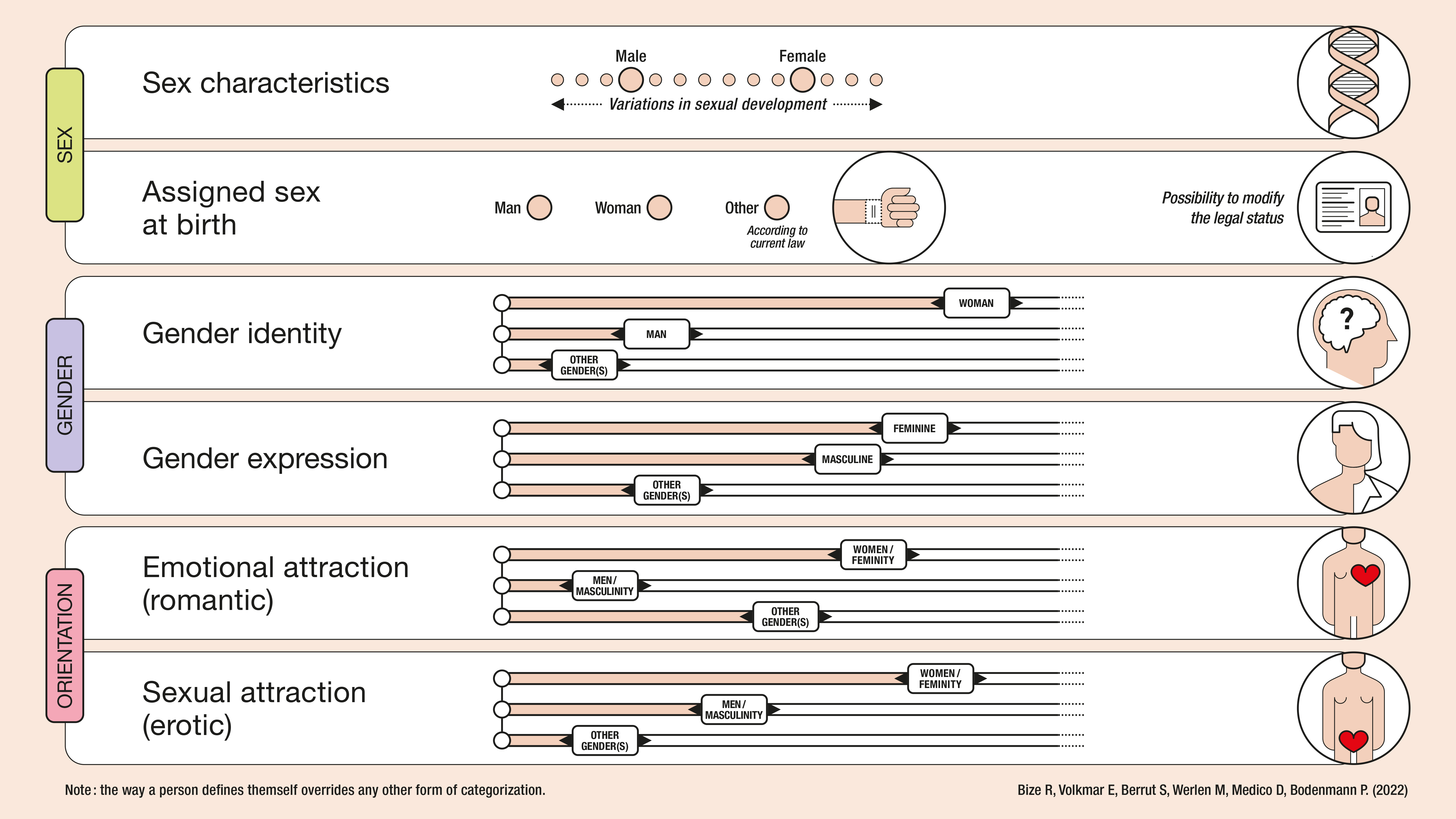 Depending on sources, gender as a concept can be described as having three or four dimensions. Four dimensions usually encompass gender identity, gender relations, gender roles or norms and institutional gender.

Definition from the World Health Organization[1]

[2] Sex-Gender-Power-Wheel © 2021 by CIHR, adapted from Sylvia Duckworth, Wheel of Power/Privilege is licensed under Attribution 4.0 International

Definition from the Council of Europe[1]

According to the Council of Europe Gender Equality Strategy 2018-2023, gender stereotypes are preconceived social and cultural patterns or ideas whereby women and men are assigned characteristics and roles determined and limited by their sex. Gender stereotyping presents a serious obstacle to the achievement of real gender equality and feeds into gender discrimination. Such stereotyping can limit the development of the natural talents and abilities of girls and boys, women and men, their educational and professional preferences, and experiences, as well as life opportunities in general. Gender stereotypes both result from and are the cause of deeply engrained attitudes, values, norms, and prejudices. They are used to justify and maintain the historical power relations of men over women, as well as sexist [homophobic and transphobic][2] attitudes, which are holding back the advancement of gender equality.

[2] Addition by the authors of the core curriculum

From gender stereotypes to gender discrimination [3]

In a medical consultation, the social and individual representations of health professionals in relation to the gender of patients are unconsciously manifested. Implicit associations are made through an unconscious and uncontrollable process, they are called stereotypes. If implicit associations have an influence (positive or negative) on the attitude towards patients, then this is a gender bias. If the bias leads to a difference in treatment with negative consequences for patients, then this is discrimination.

Starting in the early years of 21 century, interest in the differences between women's and men’s health grew giving rise to the new discipline of gender medicine [1]. Gender-specific medicine was defined as the study of how diseases differ between men and women in terms of prevention, clinical signs, therapeutic approach, prognosis, psychological and social impact [2]. Gender-specific medicine focusses the attention and efforts of the scientific community on understanding the differences of pathophysiology, clinical signs, prevention and treatment of diseases equally represented in men and women.

The World Health Organization defines gender medicine as the study of how (sex-based) biological and (gender-based) socioeconomic and cultural differences influence an individual’s health[3]. This includes interactions of the patients with the health care system and vice versa. Gender medicine addresses these topics in women, men, and gender diverse persons (Regitz-Zagrosek, Gebhard, Nature RC, 2022, in press).

[3] World Health Organisation. Gender and health: overview and WHO's role. Accessed on September 5, 2022.

Definition from the United NationWomen [1]

[1] United Nation Women. Gender mainstreaming: REPORT OF THE ECONOMIC AND SOCIAL COUNCIL FOR 1997. Accessed on 22 June 2022.

[2] Addition by the authors of the core curriculum.

Reference document for sex and gender integration in the medical education. Produced by an interuniversity collaboration.
Download the pdf document

to be completed: criteria for selecting works

GEMS © 2022 all rights reserved
Designed by